Berberian Sound Studio is, at once, a story of life imitating art, a film within a film, an appreciation of Italian horror and Surrealist cinema, and a horror film that doesn’t manage to scare as much as it manages to disorient its audience. This is to say, the film is a multi-layered attempt at deconstructing what film is and the limits of the protagonist’s psyche, portrayed through a terrifyingly surreal experience. Though, the experience may be more terrifying for the protagonist than the audience, the film does a superb job of creating a surrealist atmosphere.

Gilderoy (Toby Jones), a meek sound engineer from Britain, is hired to run sound for an Italian horror film. The lines between realities begin to blur as Gilderoy gets sucked into his surroundings and he begins to experience a hyperreality entwined with the horror film he’s working on. It’s hard to distinguish whether things are actually happening or whether we’re glimpsing instances of Gilderoy’s psychosis.

Peter Strickland, the Brit who brought us the beautiful film, Katalin Varga, directed Berberian Sound Studio. Strickland is 2-0 with his feature length films and he will be releasing his third, The Duke of Burgundy, this year. If this year’s film is as good as his last two, I think it will be safe to say that we may have a brilliant craftsman on our hands.

Berberian Sound Studio is an excellent meditation on sound and the importance of sound design in horror films. Smashing watermelons to simulate bashing human flesh, pulling the tops off radishes to imitate the ripping of hair, the distortion of music, chanting, and human screams all work together to create a melody of horror. While we never see brutality, the sound effects are enough to make your skin crawl. 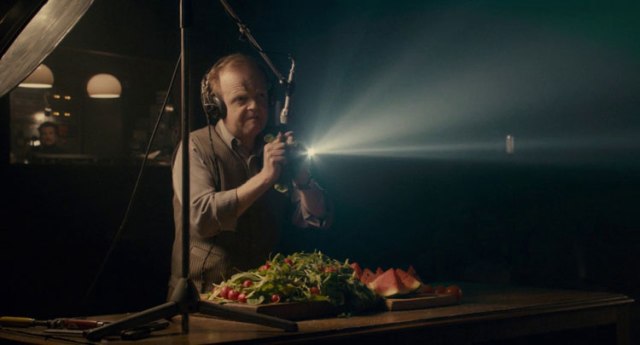