Director, Nicolas Winding Refn, has received a lot of backlash for Only God Forgives – some deserved, some not so much. After the beloved Drive with Ryan Gosling as the ever-stoic bad boy, it seems that audiences were expecting a sequel or rehash of similar themes with Winding Refn’s most recent release. However this isn’t what we get. Gosling may be just as reticent as he was in Drive, but aside from his brooding face and the robust violence, the similarities between the films end. There’s no love story to help us relate to the characters, none of which are even remotely sympathetic in their flaws. With Only God Forgives, we get prostitution, death, and one stone-cold bitch of a mother. The sex, providing little insight other than emptiness, felt more gratuitous than the violence, if only because it was a revenge (or anti-revenge?) film.

Julian (Ryan Gosling) is a drug smuggler moonlighting as a boxing teacher in Bangkok. He embarks on his mission of revenge after his brother, Billy (Tom Burke), is murdered. Gosling’s mother (Kristin Scott Thomas) arrives in Bangkok to collect her son’s body and ensure that whomever murdered her beloved firstborn pays. It turns out that a cop, Chang (Vithaya Pansringarm), sat idly by as Billy was brutally murdered by the father of a 16-year-old prostitute who had been raped and murdered by Billy.

There are many interpretations that can be made. The moments of melodrama reinforce the allegorical nature of the characters. Instead of character development and giving them autonomy, they seem to be imprisoned to their singular paths. Is Chang the embodiment of god and is Julian the lost soul, blaming god for his troubles? That’s certainly a simplification (I haven’t even mentioned the weird Oedipal theme) but, at the same time, it’s hard to give depth to what is ultimately a superficial film. 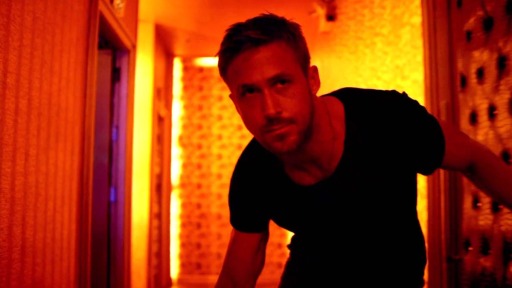 In fact, it seems that Winding Refn is more preoccupied with creating well-composed shots and visually compelling scenes than with a quality storyline. This ultimately makes Only God Forgives feel lopsided and stiff. Cinematically, the film is outstanding, Winding Refn’s use of color and framing give the film the artistic edge found Drive and Valhalla Rising. The music is often overbearing, detracting from the scene at hand. However, the reverberating sounds and drones highlight the agitation and danger surrounding the characters. Overall, the atmosphere created by the colors, sounds, and framing is what save this film from being gratuitous trite.

All in all, Only God Forgives deserves some criticism, but I’m surprised at much of the backlash. After watching 3 of Winding Refn’s films, Only God Forgives, Drive, and Valhalla Rising, it’s beginning to seem that he’s much better at creating visually appealing pieces of cinema than creating well-rounded narratives. I have two other Nicolas Winding Refn films queued on my Netflix, and I hope to review these soon. I think it will be especially interesting to see how he handles Bronson.

*Bonus! Here’s an interview with Winding Refn on Only God Forgives.