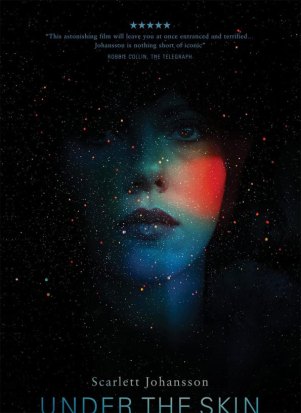 This is the first of Jonathan Glazer’s that I’ve had the pleasure of seeing. But after viewing the compelling and powerful Under the Skin, I will definitely be revisiting his other two features. In fact, I went to the DVD rental place down the street, and they had a copy of Birth for only $3.00. Hopefully I’ll be able to watch that and get a review out soon.

Under the Skin is so far the best film of the year, and I can’t see it dropping from my Top 5 of 2014. To be honest, I’m not really sure where to even begin with this one. There are so many layers and themes to pick apart and I suspect that I haven’t even picked up on them all.

Scarlett Johansson plays an alien who comes to Earth for the utilitarian purpose of seducing men and, well, killing them to harvest their skin. The aliens then wear the skin to disguise themselves among the human race. The plot may not be very involved and the minimal dialogue may make this film seem very simple. It’s anything but.

Under the Skin feels so authentic because of the way it was filmed. The men Johansson picks up in her van? Yeah they aren’t actors – they don’t even know they’re being filmed while in the van. I listened to an interview between Glazer and the guys on Filmspotting (great Podcast by the way). Glazer explained that the film crew affixed hidden cameras to the dashboard of the van. The fact that Johansson was able to elicit the dialogue needed from the men is a true testament to her acting ability. Watching it the first time, I would have never suspected the men weren’t actors.

One thing I found particularly compelling was the use of nudity in the film. It was an interesting critique of the dominant male gaze. As Johansson lures her victims to their watery depths, the men strip down, fully exposing themselves to the camera and Johansson. As they continue making their way to the partially nude Johansson, a watery, embryonic type liquid slowly engulfs them. Once fully submerged, they’re stuck in a womb-like state until the aliens deem their skin ready to be used. The men are then brutally sucked out of their skin.

Glazer literally reverses the male gaze and it’s probably no mistake that he chose Johansson, a woman who’s often subjected to the objectifying gaze of others to star in this film. It’s also interesting how the men are stuck in this “womb.” I still haven’t quite figured that part out. Is their being stuck in the womb a comment on their child-like, primal lust for Johansson?

I would say the overarching and most obvious theme is that of alienation and the longing to assimilate. There is a profound shift in Johansson’s character as she begins to envy the human condition. A dreamy montage sequence of people simply smiling and enjoying life marks her shift from utilitarian actions to emotional and thus human reactions.

When Johansson picks up her last victim, she immediately identifies with his suffering. His face is horribly disfigured and he only goes out at night to avoid the stares from others. Johansson recognizes in herself the longing and isolation/alienation this man experiences. After Johansson seduces the disfigured man, she abandons her task of preserving him and lets him go.

Under the Skin is a film that needs to be experienced. I was astounded and utterly impressed by the subtly, yet powerful themes this film presents. The score, by Mica Levi, is a dynamic and forceful component that heightens the film’s inherent anxiety.

Don’t miss this one.