Hostel: Part III – Too much of the old “switcheroo” (Netflix Streaming)

The Hostel series has been a lot of things: gory, over-the-top, even raunchy, but I never thought it would be boring. Except that’s exactly how Hostel: Part III left me: bored, apathetic, and unabsorbed.

Hostel: Part III, is this week’s Netflix review. I am sorry for the overload of horror movies, but I am a horror fan and a review of Hostel: Part III was requested by The Horror Online. If there is something you’d like to see me review, drop me a line in the comments or shoot me an email.

In case you missed the first two Hostel films: the films focus on an underground club in Slovakia where people pay good money to torture a captive. Of course, the safest way for the “torture pimps” to avoid being punished is to kidnap foreigners – those whose families are too far away to do anything. As we watch these torturers enjoy themselves, Hostel forces audiences to identify with the torturers, and thus we must admit that we get some sort of sick, twisted satisfaction from watching torture and gore.

Hostel: Part III literalizes this criticism by featuring a new torture club where people can simply watch others being tortured. Part III is the first of the series to take place in America, in Sin City to be exact. Hostel: Part III essentially follows a bachelor party gone bad, only the expected “bad guys” turn out to be the victims. The film actually sets audiences up for this continual switcheroo, and if you’re one of the more perceptive of us, it’s obvious that the film is going to overuse this gimmick from the get-go.

For example, the film opens with a rather plain, boyish, and somewhat nerdy man renting a hostel room. He enters the room, only to find it still occupied by a Ukrainian couple. The couple is rather intimidating and the camera work and dialogue leads us to believe they’re going to be the captors.  In a strange twist, the nerdy guy is the true malevolent one and drugs the couple, allowing them to be hauled away by big burly men. 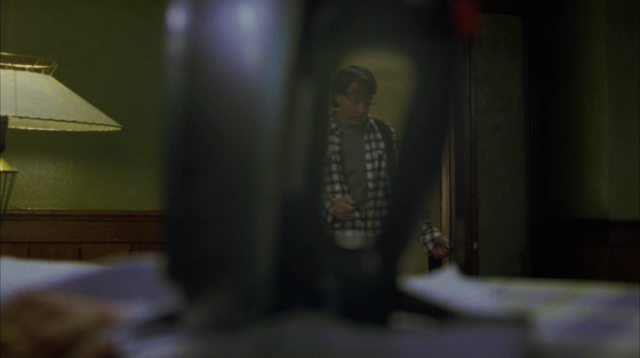 Hostel: Part III pulls this switcheroo gimmick A LOT, to the point that it becomes incredibly obvious and banal – and not in a satirical or even endearing way. It’s simply too predictable and ultimately makes the film a boring spectacle. Even the torture scenes were lackadaisical. Part III seems to have lost the edge of the former two films.

One question did keep bothering me, however. Are we Americans not as sickly twisted as our Slovakian counterparts? Why is the club in America for those who want to watch torture, but not enact it? I’m not sure if this was intentional on the director’s (Scott Spiegel) part, but it left me wondering why this change was necessary. Was Spiegel saying that Americans are more voyeuristic in nature? That might be true, but unfortunately these points were too underdeveloped in the film to actually have any merit.  The club scenes were peripheral at best as we were forced to endure the banalities of a feuding friendship (over a girl, nonetheless).

Overall, the film was extremely underwhelming. I will never understand why the directors of sequels feel it necessary to change the things that made the prequels work. If you’re a fan of the Hostel series, I’m sure my review won’t sway you against watching the latest installment. But, you should be prepared for a letdown.